Greek Methods of Repression and Punishment 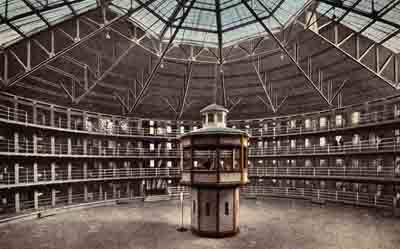 The state, as a dominant control mechanism of populations through the institutions that it controls, must be always modernized and updated in order to control and succeed in „disciplining“ the person and the societies in its reach. So, from the 18th to the 19th century the „prison“ concept slowly started to come into being – imprisonment as a means of punishment, as threat, as a stigma, as deprivation of liberty, as surgery, entirely, as much as possible, applied to the individual, and certainly as an example to all.

In Greece today the prisons and the mental hospitals loom above the heads of those who differentiate themselves from the „normality“ of society. Especially people who are in psychiatric hospitals, without any exaggeration trapped in inhuman conditions, treated by fixations, forced to take drug cocktails, are in risk of totally losing themselves. And the most horrible of all, at the mercy of psychiatrists and judges, they are denied their right to defend themselves. The psychiatrist considers and decides for them. Worse if you are both, a mental patient and a prisoner.

A modern middle age, a hell on earth, inhabited by people who are transformed into shadows. Nurtured by the nightmarish fear of finding people in such conditions, society prefers not to speak about whats happening in prisons and psychiatric hospitals.But for them we will dare to talk, we must denounce, we must publicize – as a contribution to our own freedom, since it is known that one cannot feel free when many are not, because our own freedom passes through the freedom of the other. We also know that it can very easily happen that we find ourselves in such a confinement situation.